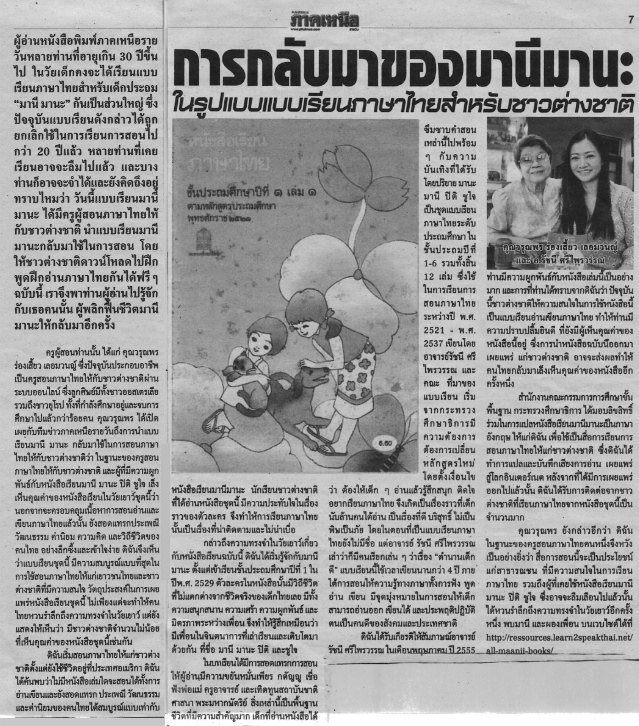 Most of our Daily North Newspaper readers over 30 years of age must have been familiarized with the Thai language book series called Maanii Maana during their primary school years. For two decades, the book series has been shelved and no longer included in today’s curriculum. Many people might already forget and some might vaguely remember or think of the characters from time to time. However, has anyone ever realized that a Thai teacher who teaches Thai to foreigners has made use of Manee Mana as a class material, freely given to foreigners who are keen on sharpening their reading skill? In this issue, we are getting to know more about her – the one who has brought Maanii  Maana back to life once again.

The teacher we are talking about is Mrs Warunporn Rongsiaw Le Moign. She is currently an online Thai language teacher for foreigners from Australia and Europe; More than a hundred of them are still studying or already finished their courses. As a Thai language teacher for foreigners and a person attached to Maanii Maana Pbidti Chujai books, she saw the existing value of this childhood book series. She revealed, “it doesn’t only offer a comprehensive knowledge about how to read and write Thai, but it also involves Thai culture, traditions, values, perceptions, and people’s way of life. They are deeply rendered and easy to understand. That’s why I think this is the most complete Thai language book series that should be used to teach young generations and foreigners who are interested in learning Thai. I republics it again in order not only to recall Thai people’s childhood memories but also to show that a number of foreigners see its importance as well.”

“I started teaching Thai to foreigners when I was living in America. I discovered back then that no Thai language books would ever be able to better Maanii Maana in terms of teaching people to read and write, and, meanwhile, educating people on Thai culture, traditions, and values. Accordingly, my foreign students who have read the book are impressed by the characters’ stories and this makes Thai learning worth catching up on and not a bitter pill for them.”

“Speaking of my childhood memories about the book, I have known Maanii Maana since I was in grade 1 in 1986. The characters’ way of life is not different from that of Thai children in reality. There’s fun, sadness, attachment, and friendship among them so I feel that I have imaginative friends who have studied and grown up together. They are Maanii Maana Pbidti Chujai.”

“The lessons were delicately embedded with a lot of desired qualities such as diligence, gratefulness, obedience to parents and teachers, as well as admiration for the nation, the religion, and the King. These basic qualities are very important in life. Children who read the book will gradually absorb them while they enjoy reading. Mana Manee Piti Chuchai is a series of 12 Thai language books for primary school students in grades 1-6. It was written by Ajaan Ratchanee Sriphraiwan and her team. The book series was the result of the need of the Ministry of Education to replace the old curriculum with a new one on one condition that children should be able to feel amused and enthusiastic to learn Thai. And that was how the stories, read by millions of children, originated. The stories in the book are good, pure, and harmless. Ajaan Ratchanee Sriphraiwan said that when the book hadn’t got the name at the first time, some people called it The Legend of Good Students for short. It took the writer 4 years to write the whole series, emphasizing on giving knowledge about language skills – listening, speaking, reading, and writing. The purpose of the book was to teach children to know how to read and write and how to be a good citizen of the society and the country.”

“I was very honored to have an interview with Ajaan Ratchanee Sriphraiwan in May 2012. She felt deeply attached to this book. And after she realized that many foreigners were interested in learning how to speak and read Thai by using this book, she was delighted that some people still appreciated its value. She also added that republicizing this book could stimulate Thai people to see what the book was meant for again.”

“The Office of The Basic Education Commission, Ministry of Education has given me the co-copyright to translate the Manee Mana book into English in order to use it as a teaching and learning material to teach Thai to foreigners. The book has been translated, recorded, and made available on the internet. Since the work was publicized, I’ve been receiving tremendous feedback from the foreigners who are studying Thai using this book.”

Mrs Warunporn also added, “I, as one of the Thai language teachers, absolutely hope that this teaching material would be useful to anyone who is interested in learning Thai and allow those, whose childhood experience of studying Thai through Maanii Maana Pbidti Chujai seems to be fading away, to bring back the memories during their school years again.”