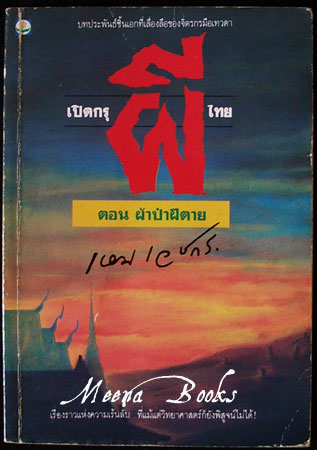 Thai attitude to spirits is quite similar to Thai attitude to human being.Some to be trusted and respected and some can’t be trusted and must be feared.
Growing up with with a big brother who often tease me with a haunted bedtime stories and a lot to see about ghost on the TV, I admit my fear of  ผี pǐi to all of you.

It is one of many tricks adult use to control children.And it works!

That being said, let me introduce to my childhood bed time stories. 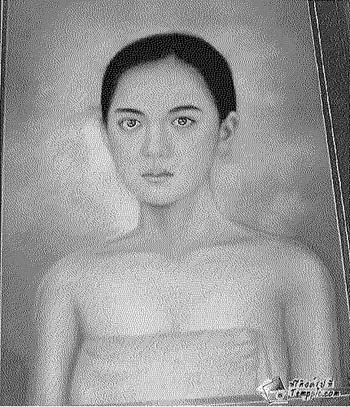 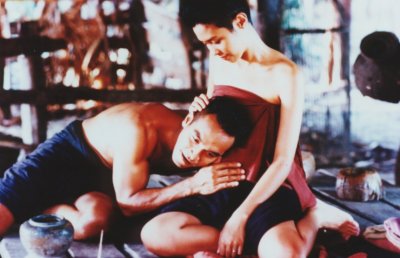 แม่นาค / mâe naâk  is a ghost story that has been told and retold for several decades.  It was said that the story originated in  พระโขนง/phrá ká nhǒng district of Bangkok.  At that time, the district was still undeveloped similar to the present-day rural Thailand.

There was a young couple , the husband was named มาก/mâak  while the wife was named  นาค /naâk.  One day when  มาก/mâak was notified for military conscription and he would have to be trained in the capital for one year.  So he had to leave his two-month pregnant wife behind with tears and fear.

มาก/mâak then bade farewell to his weeping wife and told her to take good care of the unborn child.  Since that day,  นาค /naâk waited for the return of her husband until several months had passed without any sign of his return.

At the time of the delivery of her child, นาค /naâk suffered acute pain and eventually died during laboring along with her unborn child.

In Thai we call this type of death as “  ตายทั้งกลม/dtai tang klom“  which means to die during pregnancy and her ghost will usually be fierce. มาก/mâak was not informed of the death of his dear wife.

With strong attachment to her husband, the ghost of นาค /naâk refused to go anywhere. She waited for the return of her husband at her own home. Soon after her death, at night anyone walked past her house would either hear the lullabies sung by นาค /naâk from a long distance or see her ghost holding a baby in her arms. In the temple itself, no one had the courage to go near her grave. The macabre horror terrified the people around there especially when dogs howled in chorus. Some people who ventured to challenge her spirit and met her face-to-face were said to be suffering from a high fever and falling hairs. The news of her fierce spirit spread like wildfire. People were scared of her ghost so much so that her name made their hair stand up straight.

Once there was an exorcist who wanted น้ำมันพราย/ náam man prai (an oil extracted from the chin of human corpse)  to be used as a love potion as he thought that if he could get it from a dead pregnant woman, his love potion would become more potent. So he made a ceremony and recited his magic spell to make her corpse sit up so that he could use the candle to heat her chin. Unfortunately, his magic spell was too weak to overpower the spirit of นาค /naâk, so he desperately ran for his own life otherwise he would surely be strangled dead on the spot.

Since that day, the villagers had to live in fear and horror. The disturbance of her spirit was equally make her a fiercer ghost.

Then came the day when มาก/mâak was discharged from military service. The delighted young man hurried to go home to meet his dear wife and a child. At sunset, he reached home and met his wife and a child waiting for him. He was very pleased to be able to reunite with them and hugged both of them. His wife already prepared dinner for him. มาก/mâak was now the most happy man on earth as he could now live with his family.  He lived with them for a few days without seeing anything unusual. He only wondered that why his wife rarely went outside and did not let him accompany her while going out.

Despite her effort to blind her husband from reality, she could not prevent him from knowing the truth of her death. So when มาก/mâak  had some work to do in the village, he met many of his friends who came to greet him.

Suddenly, one of his friends expressed to the loss of his wife and a child. มาก/mâak was deeply puzzled to hear it and insisted that he still lived with his wife and a child happily. His friend tried to convince him that everybody in the village knew about this and he himself helped bury her body with his own hands. Tired of convincing มาก/mâak , his friend finally suggested that in order to prove it มาก/mâak should believe in the old sayings stating that by nature a ghost would not smile and blink the eyes.  Above all, the ghost had no image to reflect in the mirror. A friend suggested him to follow his advice and.

On the way home, มาก/mâak thought of the words of his friend all the time and it seemed unconvincing as he lived with her all the time and he could touch her body as well but, at the same time , there was  no reason for a friend to deceive him either. To find out the truth, he would observe the movement of his wife from now on.

At home, his wife was busy preparing food in the kitchen. He told her a joke and tried to make her laugh, but his wife did not share the mood with him. He thus peeped at her eyes and was surprised to see that his wife did not blink her eyes at all. Now he began to have some doubt on the status of his wife but again consoled himself as it was just a coincidence. To make further proof, he looked for a mirror but could not find a single one in the house.

While stepping into the kitchen again, he saw Nark pounding น้ำพริก/ náam prík (a sauce of shrimp paste and chili eaten with vegetables and fish) and unexpectedly the lime used as ingredient fell to the ground.  นาค /naâk suddenly stretched her arm through the floorboard of their elevated wooden house to pick up the fallen fruit on the ground. มาก/mâak was stunned to see the shocking scene which turned him mad.  The frightening husband could not imagine as to how he could spend his love life with a wife who now turned to be a ghost.

To convince his suspicious wife,  มาก/mâak told her to tie his waist with a string that would enable her to detect his movement. Immediately after his wife agreed with the idea, มาก/mâak walked straight to the water jar downstairs and released the water from the hole which he had punctured during the daytime. The falling water made noise similar to that of his falling urine. มาก/mâak then untied the string from his waist and tied it with the water jar and ran away from home quickly.

After the long disappearance of her husband,  นาค /naâk became suspicious of him so she pulled the string that was still tight and called his name. When there was no answer from him, she went out to meet him only to find that her husband had already disappeared. The sad and furious ghost hurried to follow her husband who now took refuse in the consecrated assembly hall amidst the Buddhist monks who were chanting. Since it was the holy place, the ghost or any evil spirits could not enter the area. N นาค /naâk  just sat crying for มาก/mâak and promised that she would not harm anyone if he agreed to come out and lived with her.  มาก/mâak refused the plea and urged her to leave him alone as they were now living in a separate world. He would make merit for her spirit so that she would be reborn again and not to worry about him.

Unable to persuade her husband to come along,  นาค /naâk then transformed herself into an ugly ghost with a tall body and threatened to strangle to death whoever posted an obstacle to her love life. To calm down her spirit, the abbot then told  มาก/mâak  to accept the truth as she was dead and could no longer live in the human world. She should abandon defilement as death was natural occurrence to all beings on earth.

The furious ghost then told the abbot not to interfere in her personal affairs and warned him to be involved only with his religious duties. Since มาก/mâak did not want the monks to be troubled because of him, he ran away from the consecrated assembly hall and sought protection in a bush of the camphor-plant which is said to be inaccessible to a ghost. Unable to approach her husband, Nark could only cry for him and waited for him to come out till daybreak.

Since then every night a ghost of  mâe naâk would terrorize the villagers so much so that they had to live in horror. No one could suppress her spirit even the capable exorcise had to run for his life. 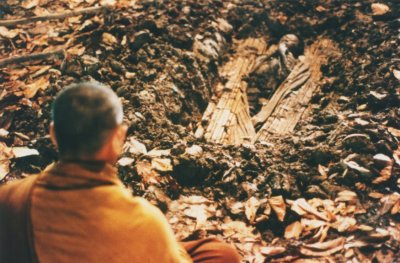 Sometime later there was a Buddhist monk Somdej Phra Puttajarn from Thonburi who volunteered to put her tormented soul to rest.

Whatever may be, her spirit now lives in peace, people from near and far come to seek spiritual help from her and urged her spirit to help in time of need. 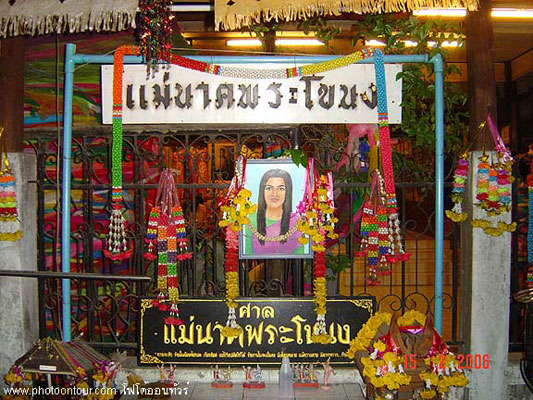 Impress your Thai friends with her name (pronounce its correctly), they would be stunned.

This entry was posted in Thai Way of life. Bookmark the permalink.

5 thoughts on “Thai Ghosts and Spirits”